Nicole here, I thought we’d best introduce ourselves properly before we dive into our content. Being a Brit living in America I get asked how I ended up over here a lot, and even more how I met Adam, so I guess I’ll start at the beginning!

When I was 17, I had a lot of decisions to make about life after Sixth Form (Senior Year of High School for the American contingent) in my little Yorkshire hometown. One major decision I made was that I had to fight my introvert personality and put myself out there more. I could escape that “quiet nerdy girl” pigeon hole I’d been crammed into in High School, and Uni was the perfect chance to take on that challenge.

I  went a bit extreme with tackling that challenge and ended up moving 3,672 miles, to attend the University of Toledo, Ohio as an exchange student. That’s when “My” story becomes “Our” story instead. On Halloween night 2009, I happened to attend the same party as my future husband, Adam. I was a Care Bear, he was Zoolander. It was true love kids! 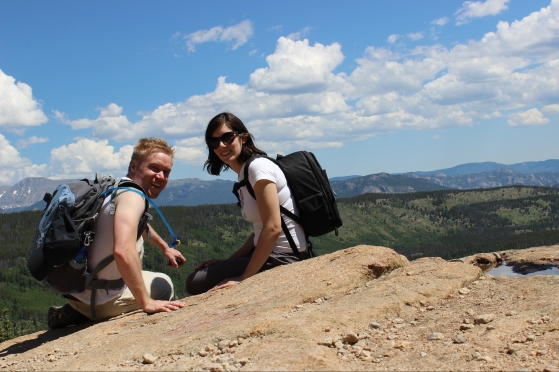 We went on our first date 4 days later and were pretty much inseparable from that day on, until my student visa expired and I had to return to the Motherland. We were in a Long Distance Relationship for around 2 years, seeing each other every 5-6 months or so. It sucked big time, but did give us a chance to start our adventures. Adam left American Soil for the first time. We saw England and Ireland together and celebrated the ultimate New Years Eve in Paris. Being in Europe really sparked a fire in Adam to see the world, for which I am very grateful!

I moved back to the US permanently in 2012 and we puddled about in Ohio for a while. We brought our furbaby home and started wondering what was next for us. We spent hours talking and researching where in the States we should end up. We even considered Melbourne, Australia for a hot second! Then Adam’s company actually gave us our Golden Ticket. If we were to choose between Indianapolis or Denver, where would we pick to live?

We drove for 24 hours into a Once Every 500 Year Storm (we still marvel at the fact we didn’t die on that drive), but we made it to our new home in Colorado. We fell in love again!  Even if we can’t travel all the time as we long to, we have so much to explore just in our own State alone. We’re constantly finding new places to enjoy and explore, I simply can’t imagine living anywhere else! Colorado is the best “Home Base” for us, though I envy those in New York and Los Angeles who can take advantage of those cheap, cheap international flight deals!

So that’s us for now. We’re going to share some past trips, namely our last trip to South Korea, but up first, Santa Fe!